About.me is a great app for getting your information out to people you wish to know about you.

about.me/affordablehomeinspections
Posted by Mike Schulz at 1:04 PM No comments:

Save Energy use CFL's 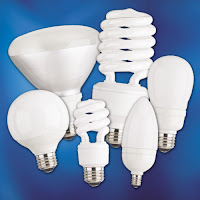 For most homes in developed countries, lighting alone accounts for 9% of the total energy requirement. For other parts of the world, it is far more than that. Thus, using cost-efficient lights can be a huge energy-saver.

By using 66% less energy than the conventional light bulbs, compact fluorescent light bulbs are made to be very efficient. Just by changing from incandescent to CFL's could reduce electrical consumption by 7%.

A US published article claimed that if a household changes 30 fixtures in their home, investing $90, the money saved in the span of five years could be anywhere from $500 to $1,500 depending on the area's electrical costs.

For commercial buildings and other bigger establishments, the savings are even greater. An average CFL at 75 watts could save $22 dollars in direct energy savings per year. If that is multiplied by the number of light bulbs in a building, and include the cost of labor that could be saved from changing light bulbs, the savings could rise exponentially.

True,there is a capital investment of about $2 - $3 USD per fixture; however, that could be recovered in a month from money saved.

The idea behind is that a little light could still remain, even for a short while, in cases of power failure and accidents.

Because Carbon Fluorescent lamps do not emit as much heat as the incandescent light bulbs, there is also less work for air conditioners in cooling up the space.

Surely there must be some downsides...

Affordable Home Inspections: Green Your Home: Save Now and Profit Later: With apologies to Sesame Street's Kermit the Frog, it is easy being a green homeowner. And it may be profitable, too. To green your home y...
Posted by Mike Schulz at 2:48 PM No comments:

Green Your Home: Save Now and Profit Later

With apologies to Sesame Street's Kermit the Frog, it is easy being a green homeowner. And it may be profitable, too.

To green your home you need to invest in a number of energy and water-saving measures that result in lower energy costs. While the initial cost of your green investment may be higher, greening your home can give you an immediate saving of 30% to 60% off your energy costs. Incentives offered by government and local electricity distribution companies will help too.

Best of all, when it's time to sell, you've increased your home's resale value - some say by as much as 10%.

A simple change of habits can start you on the road to a green home: For example, toasters, microwaves, computers and TVs steal "phantom power" - even when they're not in use. Unplug them for lower electricity bills.

Going greener may be as simple as installing energy efficient lighting, upgrading your appliances to Energy Star-rated products and switching to low-flow toilets and water-saving shower heads.

Outside, planting large deciduous trees on the west and south sides of your home moderates the temperature. The result: lower heating and cooling costs and an attractively landscaped yard.

To kick it up a notch, you could really reduce costs with energy efficient windows and insulation. A high-efficiency furnace will quickly pay for itself; as will an energy friendly air-conditioner.

You may even opt for installing solar panels to reduce your dependence on the electricity grid.

And when you're renovating, why not consider a green reno, using toxin-free building materials, cork or bamboo floors and low VOC (Volatile Organic Compounds) paint.

Ready to sell? Don't forget to trumpet your green investments. They may just sell your home.
Posted by Mike Schulz at 2:46 PM No comments:

Why do I need a home inspection?


Because most homes are sold in as-is condition, it is up to the buyer to investigate the condition of the home by having a home inspection.

1. Negotiate a home inspection contingency in your purchase contract. A week to 14 days is standard.

2. Hire a certified home inspector to do a home inspection for you. Your real estate agent can recommend someone he or she trusts.

3. Review the written home inspection report carefully and ask the home inspector any questions you may have.

4. Get three estimates from licensed contractors regarding any home system repairs that are needed. Obtain a referral from your agent, a friend or a family member. Ask for the contractor's references.

5. Having information about the condition of the home is important for making the right investment decision.

Posted by Mike Schulz at 4:38 PM No comments:

Thank You for visting my Blog. Please leave a comment about anything ! Visit my web site at www.houseinspections.com

Never purchase a home without one!

Mike Schulz
Fuquay Varina, NC, United States
Since my early teen age years I have been always a hands on type of person. Instead of someone else fixing or building something for me I took the time to learn and do it myself. No challenge was to large. From building cars & motorcycles to electronics' trouble shooting and furniture building. I have over 30 years experience in construction. My primary job was a roofing contractor for many years. I also have hands on experience in electrical , plumbing, framing, hvac, sheet rock, flooring.and trim work . Through the years on new residential work it always troubled me when I see other sub contractors install components of there trade incorrectly. I would go to them or the builder to express my concerns and they where always grateful. In the early 90's when I was speaking with a builder about concerns of one of the trades he told me I should be a inspector. So in 94 I began a home Inspection business. I prided myself on being unbiased about my findings for the benefit of my clients.